Posted on October 31, 2012 by Valerie Alexander

“I tell you the truth, if you have faith as small as a mustard seed, you can say to this mountain, ‘move from here to there’ and it will move.  Nothing will be impossible to you!”
~Jesus

Dear Ones, nothing will be impossible to you!  Do you believe it?  I believe and I am here to make the case that we have more potential and more power than we realize.  It is my intention to inspire you and to point out that you possess a magic wand, of sorts.  So when you encounter a mountain of obstacles that stand between you and your goals or a mountain of doubts that tell you that you can’t have the life you really want to be living, you  can move that mountain.  Such a claim may sound like a bunch of hocus pocus, but it is not and you will see.  It is focus pocus! 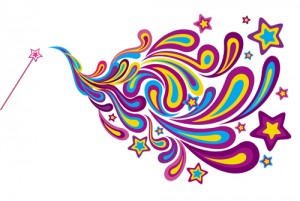 Our focus, intentions, and expectations have a powerful organizing ability like a magic wand, or for the men, if you prefer, a wizard’s staff.

You see the gap between spirituality and science is getting smaller.  On one side of the gap we have those who primarily operate within a faith based belief system.  They transcend the horizontal plane, where the mountains are, and they open up the vertical channels through prayer, meditation and visualization.  Their faith tells them, “I will see it when I believe it.”  On the opposite side of the gap is the logical minded, scientific method oriented, scientist type who says, “I will believe it when I see it and even then I want it quantified, verified and replicated.  Those people over there, praying and meditating, well they are just engaged in magical thinking.”

I a very happy to report that findings in quantum physics are coming in to fill the gap!  Now, I might of just mentioned something frightening, “quantum physics”, but I promise y0u I do not have the intellectual capacity to talk over your heads about this.  Simply, quantum physics is the study of small things, very small things.  If you take anything in the material world and break it down to its most basic form that is what quantum physicists study, subatomic particles.

Tracks showing the movement of the subatomic particle, neutrino.

An extraordinary premise in quantum theory, that fascinates philosophers and physicists, states that by the very act of observing, the observer affects the observed reality.  At the Weizmann Institute of Science in Israel scientist conducted a highly controlled experiment demonstrating how a beam of electrons was affected by being observed.  What they discovered is, the greater the amount of watching, the greater the observer’s influence on what actually took place.  Observation affects reality! 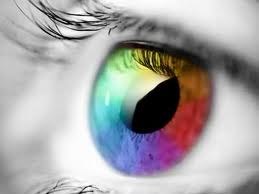 In the quantum world things exist in a state of potential, just like your desires.  In the quantum world things may be a wave and then someone focuses on it, interacts with it and then it gets pinned down into the form of a particle.  Such findings have lead some quantum physicists to feel that in the beginning there was consciousness and consciousness interacted with the pure potential of subatomic particles and pinned them down into form.  Doesn’t that sound a lot like, “In the beginning was the word and the word was made flesh”?  Focus, whether focus of word or observation brings form to potential.  You see the gap between spirituality and science is getting smaller!

Now, how do we apply this knowledge and use our magic wand when we encounter a mountain in our lives?  I will share with you a personal example.  Some years ago I moved to London and I did not move in a traditional sense.  I did not have a plan or a big bank account.  I went on a tourist visa that was good for six months, but I wanted to stay much longer than that.  So, as the mountain of my expiring tourist visa was approaching I discovered that once in the country a tourist visa can only be changed to a student visa.  I did some research and found a course of study in art and interior design that I was very passionate about.

I applied, interviewed and got accepted!  Then another mountain appeared, the tuition!  The tuition was £11,000 and it had to paid in full and upfront.  £11,000 converted roughly to about $18,000.  I did not have the money nor was I going to ask anyone for the money.  I did not feel working on the horizontal plane with the material world was going to benefit me, so I went vertical.

I shifted into high gear, selected the best tools I had to accomplish my desire and developed a regimen that I did throughout the day, every day for about five weeks.  One tool I used is affirmations.  I created a mantra, which is a short paragraph containing simple and powerful statements that clearly support your intention.  I recited my mantra silently and verbally throughout the day.  At first I began my mantra with the statement, “I am prospering!” but I did not feel the truth of that as I knew the balance in my bank account did not agree.  Because I had resistance to “I am prospering!” I changed it to “I believe I am prospering!  I believe prosperity is my birth right.”  That felt much better and after a few days of saying I believed it the resistance evaporated and I was able to switch back to, “I am prospering! Prosperity is my birth right.”

Another statement that was a part of my mantra was, “My tuition is paid for in full!  I have my student visa!”.  Notice I did not focus on the money.  I instead focused on the outcome.  Trying to manifest $18,000 in less than two months is possible, but we have so much resistance around money it is best to bypass it altogether if at all possible.  Focus only on the outcome, not how much the outcome will cost.

Finally, my favorite tools were employed, meditation and prayer.  I used earphones, listened to meditation music and focused.  I have been using the same self guided meditation for years because it is extremely effective.  I am currently working on recording it and making a MP3 download for my clients.  When praying it is important to pray using affirmative statements.  Give thanks as if what you want has been granted.  Feel grateful as if what you want is happening.  Have faith, believe even though it has yet to manifest into form.  Remember you are working with the world of potential, focusing your energy of thought and feeling, which will bring your desire into form.

So how do you think it worked out for me?  Did I have to return to the states because my tourist visa expired?  No!  Of all people to meet in London I met a mover shaker, wheeler dealer type person who loved being the benefactor of other people’s dreams.  This person knew what I was aiming to achieve and one day he said, “I’ll pay for your tuition.”  I never asked for the money.  The money never touched my hands and he paid my tuition in full, just as I had stated in my mantra.  In exchange I did design work for him.  It was a win/win!

Dear One, think of a dream you have.  Your dream, like the quantum world, exists in a state of pure potential.  Apply the organizing tools of focus, intention and expectations and if you have the faith as small as a mustard seed, nothing will be impossible to you!

If you feel stuck or don’t know how to get started bringing life to your desires I am happy to help.  In a session I can scan your energy and show you where your resistance is or where you may be encountering blocks.  Often a new perspective can cause the most amazing shifts.  Your desires can be fulfilled! 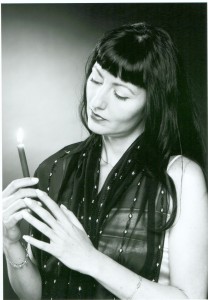 “I tell you the truth, if you have faith as small as a mustard seed, you can say to this mountain, ‘move from here to there’ and it will move.  Nothing will be impossible to you!” ~Jesus Dear Ones, nothing … Continue reading →